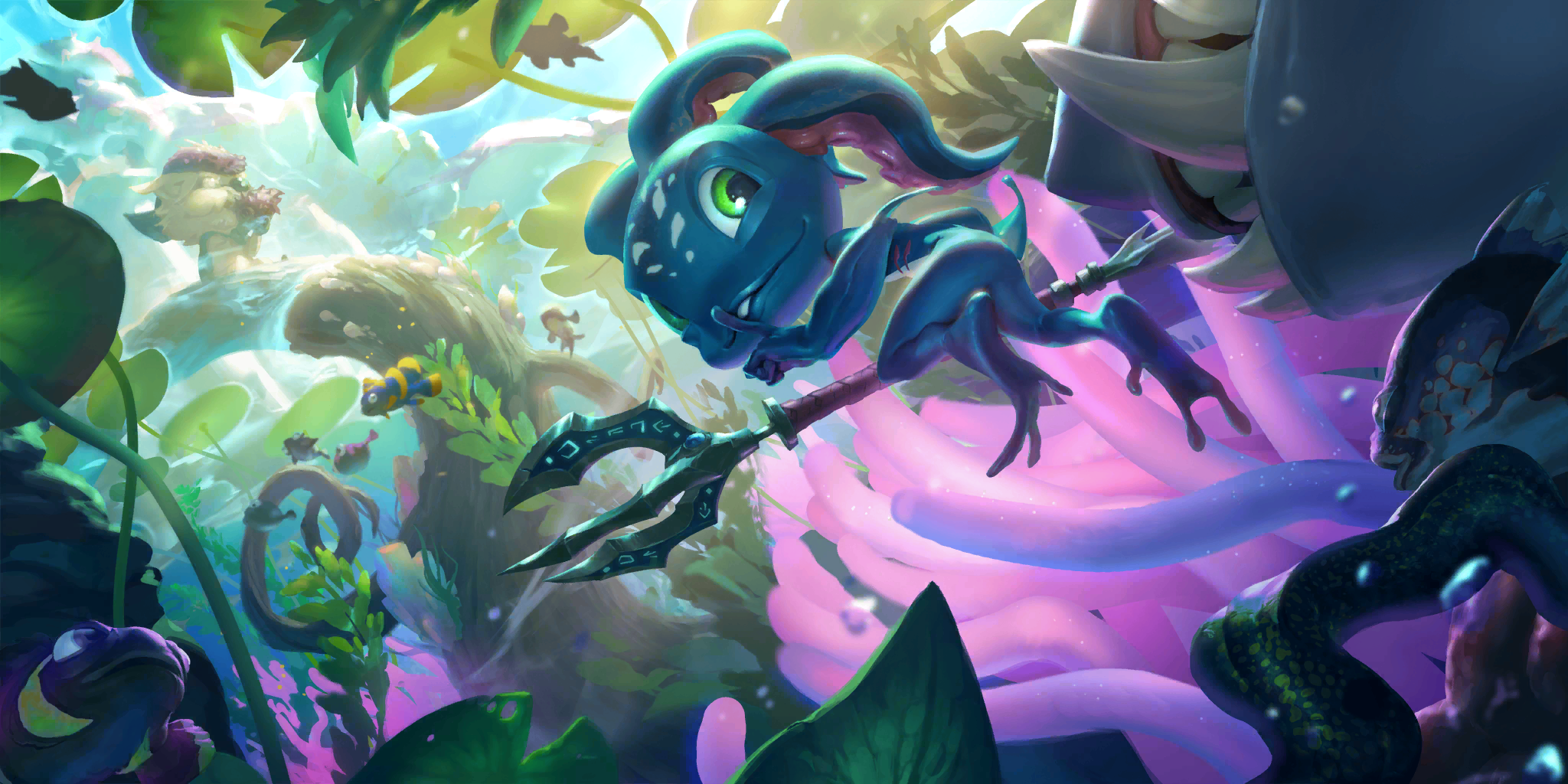 Hey there! The patch notes for 1.2 are out, and I'm here to go over what the nerfs and buffs mean for RuneTiera's Expedition Tier List. 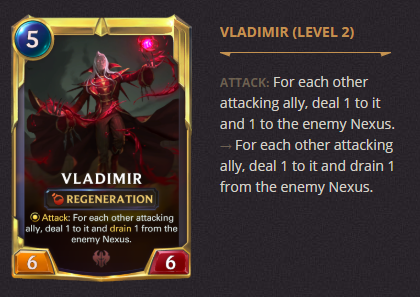 Vladimir: C+ (no change). This change doesn't fix the core of why Vlad is bad. When you pay 5 mana into a Champion, you want to be able to always be attacking with it -- but a lot of the time Vladimir puts you in the uncomfortable position of choosing between attacking with him or your other units. He's already pretty hard to level up, and reasonably powerful when leveled. 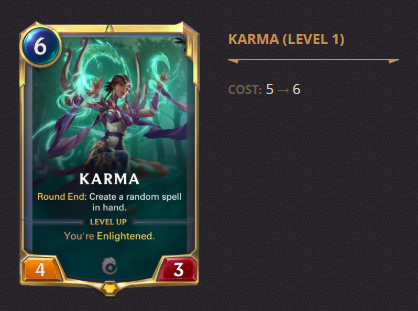 Karma: B to C+. Ouch, this one hurts a lot. I guess her overperformance in Ranked led to an overcompensation in Expeditions; talk about bad karma. Jokes aside, Karma was already pretty middling; it's hard to streamline a deck around surviving til turn 10, and surprisingly few spells in Expedition do anything when doubled. Her best mode was on coming down on curve and drawing you an extra card every round; now the potential for that has shrunk by 1 card. And adding a mana onto anything is already a huge nerf! 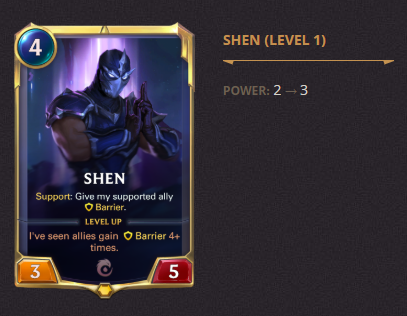 Shen: B+ to A-. The difference between a 2/5 and 3/5 is actually huge. Whereas Shen used to bounce off of many a 2 and 3-drop with 3 health, now he chews through them like candy. That's almost a Bull Elnuk's worth of stats, and he has that powerful support ability. 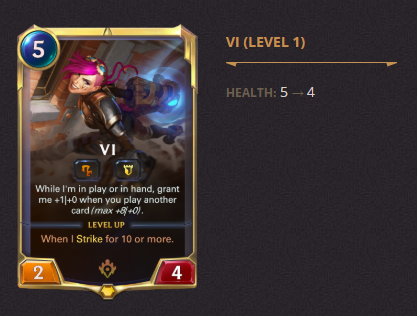 Vi: A- to B. Vi was already difficult to exploit as a Champion; as described in the patch notes, she was solid but never game-warping. And game-warping is a pretty important aspect for your Champion to have. She now trades off against a much wider variety of opposing units; every point of health on a Tough unit is exponentially more valuable. 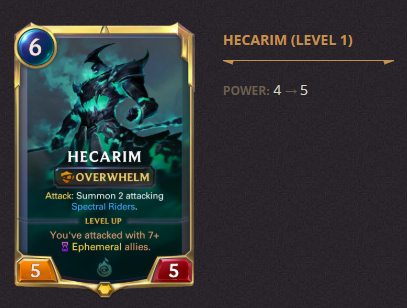 Hecarim: B+ (no change). 4 to 5 power might seem impressive, but in context of Hecarim it's really more like going from 8 to 9. Much of his overall power is tied up in the attacking Shadow Riders, so this is a pretty weaksauce buff; more survivability in the form of added health would have had a bigger impact (Which is incidentally why they nerfed him from 4/6 to 4/5 in the first place). 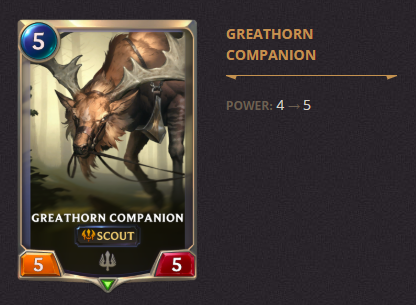 Greathorn Companion: B- to B+. Meanwhile, 4 to 5 is a huge upgrade to Greathorn Companion. Not to stretch the analogy too far, but he effectively goes from dealing 8 damage to doing 10 if unchecked. Your opponent might have been content to take the damage before; now they're much more incentivized to trade with two of their units, which is exactly what you want your expensive midgame threat to do. This companion is now much more worthy of his horn. 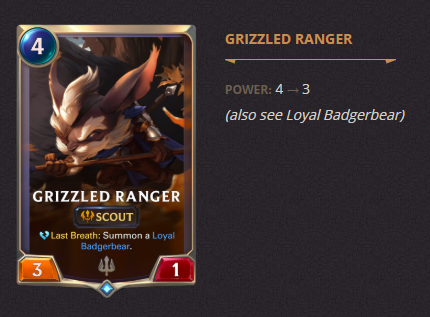 Grizzled Ranger: A to A-. If anything, Grizzled Ranger's previous rating was a bit low, so this is a huge nerf to his playability. He now trades evenly against an opposing 4/4, of which there are a decent amount of at 4 mana. It's possible his new power level actually falls below this range, but I'm erring on the side of caution for now. 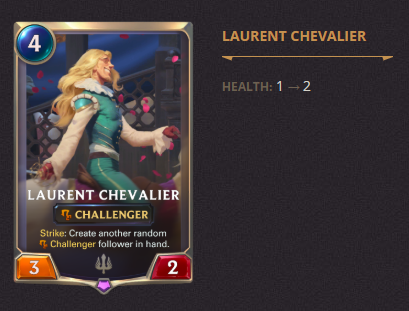 Laurent Chevalier: C to C+. Laurent Chevalier remains the worst of the Demacian challengers, since his base body is just so weak as to be meaningless. I mean, really, compare him to like, Swiftwing Lancer: For 1 more mana you get +2/+2 and a much better shot at drawing a unit (Last Breath basically always triggers, whereas Strike is easily disrupted by Freeze/Barrier/removal). 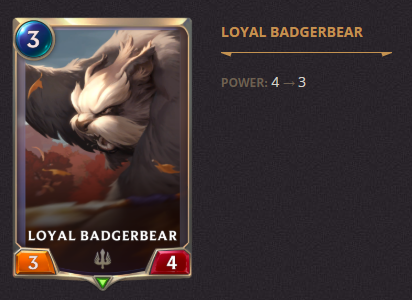 Loyal Badgerbear: A to A-. Everyone's favorite bear/badger hybrid is dropping a notch. Hearthstone aficionados will recognize that the classic Spider Tank still provides solid stats, but you no longer need to pick him up as loyally as before. 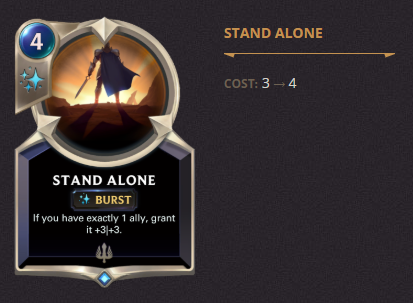 Stand Alone: D+ to D-. Am I alone in thinking that this card was already awful? Perhaps Stand Alone was oppressive with Fiora in Ranked, I don't know, I don't play that format. Anyways in Expedition, it was nice but not game-breaking to be able to use this on a random 3-drop, and on the flip side it turns into a dead draw way too often in the late game. 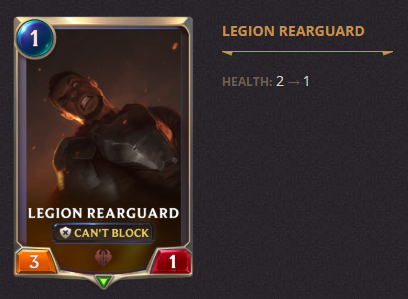 Legion Rearguard: B- (no change). So the most important question is: if he's a rearguard, why the heck can't he block? Is this a joke about how Noxians don't care about guarding anything? I don't get it. Anyways Legion Rearguard remains very high-variance: great when uncontested on turn 1, and an awful as soon as anything starts coming down on board. 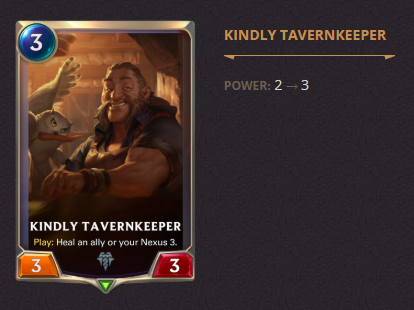 Kindly Tavernkeeper: C- to B-. Recent patches have indeed been kind to Freljord, what with Starlit Seer, Avarosan Trapper, and now this all getting meaningful stat boosts. An extra point of power matters much more on a cheap unit with little to boast of (e.g. it's 50% more damage, compared to 25% more on Greathorn Companion). The downside is that I'm gonna have to find a new example for a unit that fails the Vanilla test. 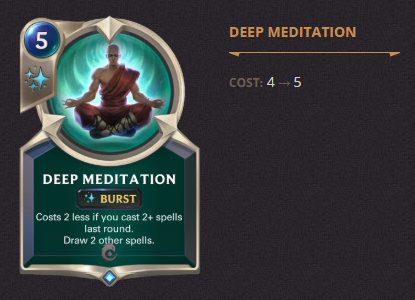 Deep Meditation: B- to C. I was already pretty unimpressed with the Ionian spell archetypes -- their spells barely affect the board (compare e.g. Shadowshift to Mystic Shot or Back to Back), and their payoffs are much weaker (Lee Sin vs Heimer or Lux). I doubt they meditated much about Expedition when nerfing this card, anyways. 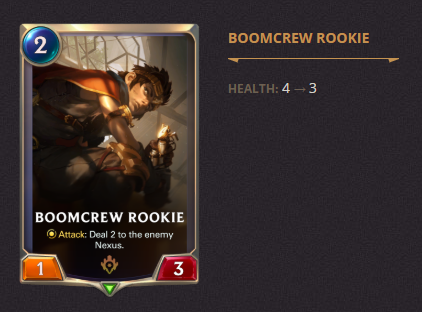 Boomcrew Rookie: C to D+. This card is already way overvalued in Expedition; it's just really hard to have a deck that's so streamlined around Nexus damage that you can afford the loss of raw stats. Expedition is almost always about board control, and a 1/3 fails horribly on that count. 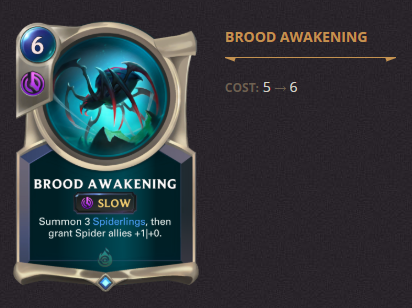 Brood Awakening: A to B+. On one hand, I'm sad to see this nerf, as I loved using the raw power on innocuous-seeming spiders. But I think this is a great change for Expedition, as having 3 surprise blockers or attackers is very out of the ordinary for a single priority phase, and adding an extra mana makes it more fair and easier to play around. You can still drop this on turn 3 by passing your first two turns, so it remains a summoning an army with just one card. 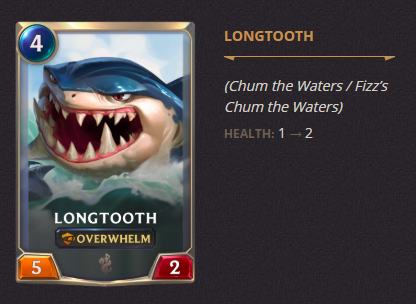 Chum the Waters: C+ (no change). Yeah, this is a bit of a buff, but Chum the Waters was already pretty suspect to begin with. Longtooth remains a long shot in terms of being actually able to eat an opposing unit; as a slow spell it's telegraphed way in advance and still loses to every combat trick. 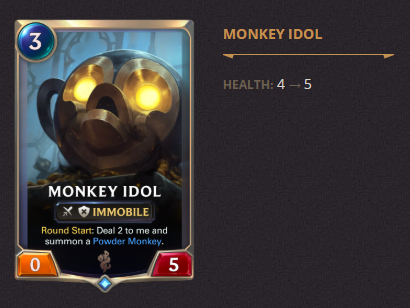 Monkey Idol: C- (no change). Again, C- was probably quite high for this effect previously; even now I want to dismiss it as monkey business. That said, the third Monkey means that you can actually get two attacks in, raising the total damage output by quite a lot (4ish to 7ish) if you land it at the right time. 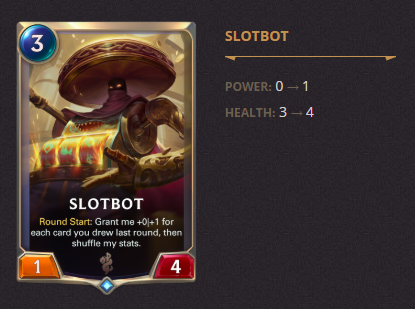 Slotbot: C- to C+. Slotbot is rapidly approaching the stats needed to be competitive in Expedition. For 3 mana, you'd expect a 3/3 aka 6 total power and health; Slotbot went from 3 to 5 total, and continues growing rapidly from there.